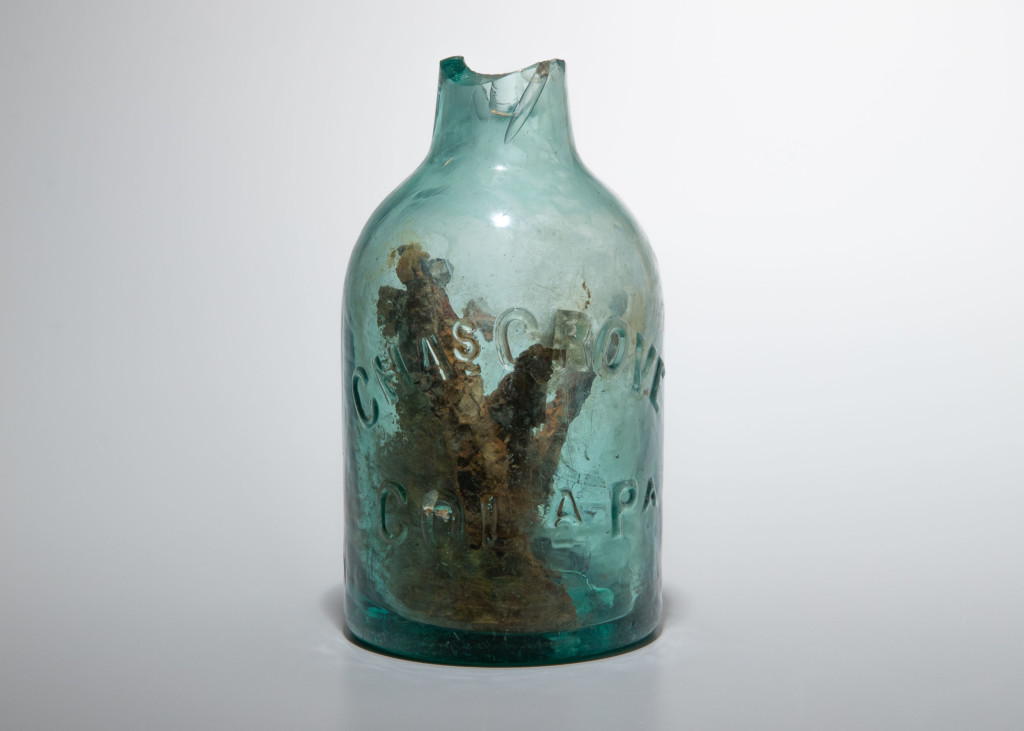 Have you ever stooped to pick up a lucky penny? Searched for a four-leaf clover? Avoided a black cat? Worn lucky socks during a sporting event? If so, you’ve been practicing magic of a sort. But while these may seem like harmless superstitions to us, folk magic was deadly serious to many early European settlers in America.

This daisy wheel is carved into the casing of the office door of archaeologist Emerson Baker’s 1790-era home. | Credit: Emerson Baker

Magical objects are often found in groups, like this assemblage of African American Hoodoo magical healing objects that were hidden behind the door jamb of a late nineteenth-century cabin in Northwest Montana. | Photo courtesy of the Lolo National Forest Heritage Program

A woman's shoe was found behind the subfloor of an 1880s house in Missoula, Montana. The shoe was part of a group of concealed objects that also included a felt hat, a cat, and a Civil War bayonet. | Courtesy of the University of Montana Historic Archaeology Lab

This historic woodcut from the 1720 book the History of Witches and Wizards shows witches offering small dolls known as poppets to the devil, illustrating the connection between poppets and demonic belief. Poppets were used both by, and against, supposed witches. | Credit: C. Riley Auge

Researchers at the College of William & Mary think a piece of Civil War-era glassware found at the site of an old fort in eastern Virginia may have been a witch bottle used to ward off evil spirits. | Credit: Robert Hunter/William & Mary Center for Archaeological Research

Coming to a dangerous new land was fraught with fears and, though the vast majority of colonists were devout Christians, archaeologists have discovered that, in addition to their faith, the colonists also resorted to charms, curses, and the like for protection. According to archaeologist C. Riley Augé, author of The Archaeology of Magic: Gender and Domestic Protection in Seventeenth-Century New England, “Magic was another tool, another strategy to relieve their anxiety, to give them some sense of power and control in a world that was just permeated with danger—naturally and supernaturally.” Archaeologist Emerson Baker, of Salem State University concurred, “It was accepted that witches were absolutely real. They could be anybody, and you wouldn’t know who they were. It’s comparable to how people fear terrorists today.”

In many cases, folk magic was practiced with common objects that could be easily misinterpreted. But now, with the help of large data sets, analysis of concealment methods, concurrent European research, and examination of the historical record, some archaeologists are identifying these objects as tools of magic. Today, most archaeological discoveries are related to apotropaic magic. Archaeologist and architectural historian M. Chris Manning, Executive Director of the Overfield Tavern Museum in Troy, Ohio, described apotropaic objects as items “intended to repel evil, witchcraft, mischievous or malignant nonhuman beings, disease and injury, fire, lightning and hailstorms, infertility, bad luck, and general misfortune.” But, she added, apotropaia can also conversely “attract prosperity, health, wealth, happiness, fertility, and good luck.”